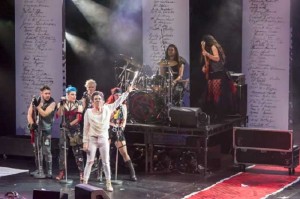 It’s a sound that reaches through New Zealand history: 28 July 1893, when the bulk of the women’s suffrage petition hit the back wall of the debating chamber after being unrolled by John Hall from the broomstick on which it had been delivered. Almost all of the petition survived this treatment to become one of the three nation-building documents constituting the National Library’s He Tohu exhibition, where visitors get to see  it under carefully controlled conditions.

The 1893 suffrage petition also takes a starring role in That Bloody Woman, Gregory Cooper and Luke di Somma’s punk rock musical about that bloody woman, Kate Sheppard, who went from being a temperance activist to the face of our $10 note. The show started out smallish in an intimate venue at the 2015 arts festival in Sheppard’s home town of Christchurch, but the bigger venues and budgets of the 2016 production by the Auckland Theatre Company and Court Theatre offered the opportunity for spectacle. Auckland designer Rachael Walker became one of the team majorly inspired by the petition as an object. As Walker notes, it was “surely impossible to stage such an internationally historical NZ achievement without a visual representation of that final petition”. The challenge, then, to transform a long roll of signatures into the wow factor. 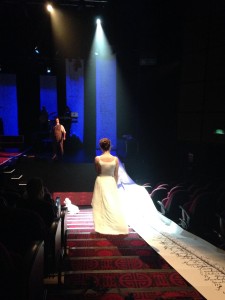 Sky City – banners in the aisle

If you have been to the show, you know how they did it. Walker and the team worked with Archives New Zealand to use high-resolution images of pages of the petition at a large scale, turning them into banners that unfurl at the point in the show where Hall takes his place in posterity.  Six 6m long, solenoid-activated petition sheets drop on cue, while cast members pull out two longer banners into the theatre’s aisles, in the SkyCity auditorium to a full 20m.

At least 10 people were involved in working up the concept.  Walker and the ATC production team cleaned the page images so they would stand out well to the audience; even if we can’t quite read Kate Sheppard’s signature on one of the banner, it’s there. The Bannertex fabric used met the necessary specs of being light, printable, durable, with a good fall, and washable – as Walker says, the petition is white after all. White was a key colour in the overall production design, relating to Kate’s costumes, to the white camellia suffrage symbol, and the essence of ‘freedom, purity and femininity’. Walker’s banners and Lisa Holmes’s costume designs reflected each other, with Kate’s signature also being incorporated into her own very distinctive jacket. 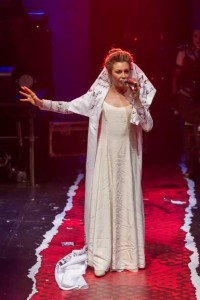 Rachael Walker and the production team knew during the technical rehearsal just how emotional and powerful the effect of the banner drop would be. Audience previews also confirmed it, and Walker confirms it as her favourite theatrical moment of the show. In the performance I saw during the production’s 2017 national tour, you could feel the audience smile, and more than a few people wiped an eye moist with something like pride. The entire petition is 270m long, but the scale of the 70m or so in the theatre reminds us of the scale of the undertaking, and connects us to the women behind those signatures. That Bloody Woman’s onstage cast is small, but the petition comprised the intent of thousands of women making their voices heard, then and forever. In recreating John Hall’s petition presentation, with elegance and grace, Walker and the rest of the team brought history to life. 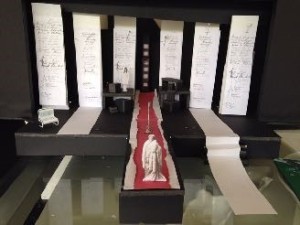 Scale 1:25 model of the set with banners Photo Rachael Walker

The ATC production team for That Bloody Woman:

Thanks to Rachael Walker and Gregory Cooper for their assistance with this blog post, and to Rachael and ATC for the images.