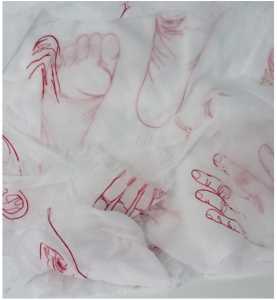 Throughout August – September, there are textiles floating through galleries from Dunedin to Auckland. Here’s a brief rundown.

Dunedin School of Art Gallery: Corporeal Explorations, 6-16 August. Be in quick for this exhibition of work by DSA Artist in Residence, Barbara Graf. Barbara is an artist and lecturer at the University of Applied Arts Vienna in the Textile Department. In her work she investigates body representations and develops flexible sculptures as a second skin. The main media are drawing, sculpture, photography and film. Since 2004 she has been working in artistic research projects dealing with medical issues.

Moving up the island to Nelson, the Suter Art Gallery’s current mixed media collaborative show by Alexis Neal and Elke Finkenauer, Something to Remember, runs to 6 October. In September, just in time for the CTANZ symposium in Nelson, it will be joined by Dunedin textile artist Jay Hutchinson’s The archaeology of the discarded, forgotten and thrown away, which builds on Hutchinson’s work from the last two years as well as presenting new ‘discarded’ objects and an ambitious full sized embroidered fence.

Across the strait, for August only, is Suffrage in Stitches at Wellington Museum. The project, was developed for last year’s Suffrage 125  by Suffrage in Stitches, matches the length of the original petition and consists of 546 individually designed fabric panels (number of pages in the original petition) telling the stories of those who signed the petition or relatives who’ve influenced the 546 makers. The work includes the names of 546 women and over 27,000 hand-stitched marks, one for each signature on the petition, along with multiple surface decoration techniques. 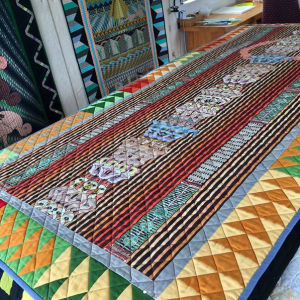 Up in Tauranga, you might not expect textiles in an exhibition on virtual reality, but Terminus is created by Simon Ward and Jess Johnson, and Jess collaborates with her quilter mother Cynthia Johnson on large scale collaborative wall hangings, a selection of which feature in the exhibition, which runs through to late October at Tauranga Art Gallery. 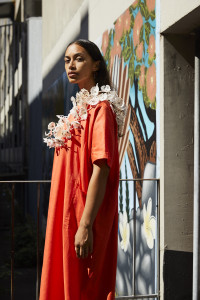 Finally, for now, there’s Auckland. At Auckland Museum, there’s bags of interest at Carried Away. which unpacks over 150 bags from the museum’s collection (until 1 December). But the upcoming highlight is the NZ Fashion Museum’s new exhibition in partnership with Te Te Uru Waitākere Contemporary Gallery, Moana Currents: Dressing Aotearoa Now.  Curated by Doris de Pont and Dan Ahwa, Moana Currents celebrates contemporary expression in jewellery, clothing, textile, and body adornment in New Zealand. Complimented by art installations, video and performances the exhibition undresses the layers of references and invites the audience to consider the making of Aotearoa style. This three-part project includes the Te Uru exhibition, which opens 7 September and runs until 1 December, and the Fashion Museum’s usual accompanying book and online exhibition at nzfashionmuseum.org.nz