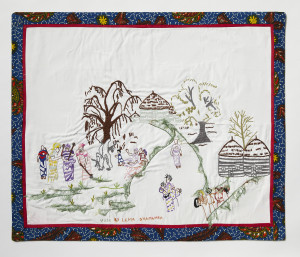 Just opened this weekend (19 October), textile exhibitions at two of the country’s most recognised centres of craft/object art. At Objectspace in Auckland, Mulame is the first solo exhibition by Lema Shamamba, a community leader, educator, mother and storyteller who arrived in Aotearoa New Zealand in 2009 as a refugee from the Democratic Republic of the Congo (DRC). Mulame’s work originated as stories first drawn to overcome language barriers, then further translated into embroidered narratives, equally personal and political. (Keep an eye out for a review of Malame in the next issue of Context.) 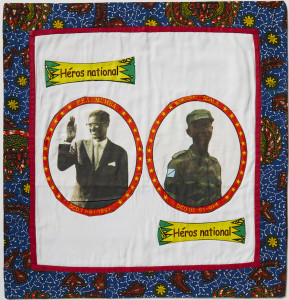 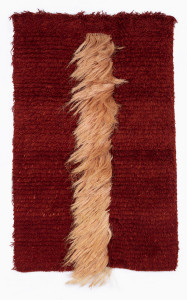 At the other end of the island, the Dowse has just opened Nomads, featuring the work of pioneering textile artist Zena Abbott (1922-1993) and the contemporary artist Emma Fitts. Abbott was one of New Zealand’s first professional weavers; in 1987, inspired by a documentary about the Nomad Weavers of Turkey, she developed a collaborative project with the Pakuranga Arts Society Fibre Group, Nomads on the Move. The current exhibition includes Abbott’s original Nomads work and other examples of her work from the Dowse collection, as well as Emma Fitts’s contemporary interpretation.

During the exhibition run, the Dowse has arranged a screening of The Black Tent, a 2019 German documentary about the desert tents of the Yoruk nomads.