Lecture: Dreams and Responsibilities: The Arts and Crafts Movement in Ireland

Friends of Te Papa $15, non-members $25 (includes a glass of wine and free parking)

Dr Joseph McBrinn, Reader in design history at the Belfast School of Art, Ulster University, is coming to New Zealand to present a paper at the Myriad Faces of War symposium on a work-box embroidered by a disabled soldier that was presented to the Dominion Museum, now Te Papa, by Queen Mary in 1946. Following the symposium, he will present an illustrated lecture on Dreams and Responsibilities: The Arts and Crafts Movement in Ireland at Te Papa.

Many traditional crafts flourished throughout Ireland well into the nineteenth century. However, the national calamity of the mid-century Famine and the mass emigration it stimulated, as well as uneven industrial development and increasing religious and political sectarianism created a profound instability and long-lasting poverty that shocked even William Morris when he came to Ireland in 1877 and again in 1886. The Irish Arts and Crafts movement initially emerged under Morris’s influence but like other small nations on Europe’s peripheries (such as Poland, Hungary or Finland) Ireland’s struggle for self-determination, and ultimately modernization, was accompanied by a unique reinvestment in its folk and vernacular heritage. 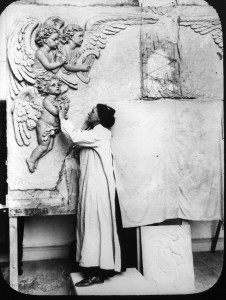 S. Rosamond Praeger working on the decoration of the façade of the Thomas Andrews/Titanic Memorial Hall.

This illustrated lecture will look at some of the key centres of Arts and Crafts activity in Ireland, such as the cities of Dublin, Cork and Belfast. Women who played a crucially important role in this movement includes Mabel Annesley, who left Ireland for New Zealand at the outbreak of the second World War.

Dr. Joseph McBrinn is Reader in design history at Belfast School of Art of Ulster University. He previously taught at the National College of Art and Design in Dublin. Previous to this he studied and worked in Scotland and France.

He has written and lectured widely on Irish art, craft and design. He has written biographical studies of the Northern Irish artists Sophia Rosamond Praeger (1867-1954) and John Luke (1906-1975), and curated retrospective exhibitions of their work: in 2007 (for The Naughton Gallery, Queen’s University Belfast); and in 2012 (for the Ulster Museum/National Museums Northern Ireland) respectively.

He serves on the editorial board and editorial advisory boards of The Journal of Modern Craft, Textile: Cloth and Culture and The Irish Arts Review. His current research focuses on the intersection of masculinity and design with a particular interest in the First World War and interwar Britain. 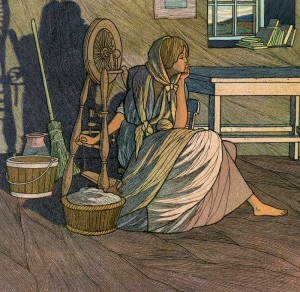 This entry was posted in Craft, History, Lectures & Talks. Bookmark the permalink.