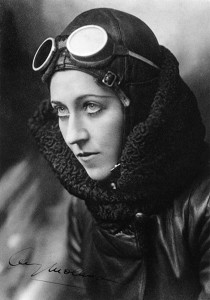 CTANZ, in association with the Auckland Museum Institute & with thanks to the Auckland War Memorial Museum Tamaki Paenga Hira, is delighted to present

High Flown Fashion: Women Pilots and the Selling of Aviation 1909-1939

In 1928, Amelia Earhart became the first woman to cross the Atlantic Ocean by air, when she rode as a passenger in a plane captained and navigated by two men.  This flight, coming a year after Charles Lindbergh’s nonstop solo flight between New York and Paris in May 1927, heightened the marketing frenzy among manufacturers and designers eager to share in the lustre of aviation’s heroes.  Earhart (who later made the trans-Atlantic flight on her own) joined Lindbergh as the most influential spokespersons for American aviation.

But the years between 1909 and 1939, sometimes considered aviation’s “Golden Age,” produced many female pilots—household names in their day—who worked hard for the cause of aviation.  Women such as Harriet Quimby, Amy Johnson, Louise Thaden, Anne Morrow Lindbergh, Elinor Smith, Ruth Nichols, Fay Gillis, and Jacqueline Cochran played important roles in socializing aviation, through their flying skills and their public images.  This talk explores how “clothes made the [wo]man,” helping female pilots promote aviation as a safe, commonplace mode of transportation.

This lecture is one of a series of 3, proudly brought to you by CTANZ (Costume & Textile Association of New Zealand). The other lectures will be presented in Wellington (Te Papa) and Dunedin. (Advertised soon!)