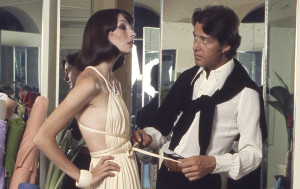 2018 was such a big year for textile/dress movies that it’s seemed that this year has been a bit short of dressy films, but fortunately the NZIFF knows that the frockies come out for the occasion and have scheduled a few for our delectation.

Over the last few years we’ve revelled in the extravaganzas of Dior, McQueen, Westwood, Guo Pei. After gorgeous reflections on Diana Vreeland and Dior, director Frédéric Tcheng has turned his attention to Roy Halston Frowick. It’s another fashion rise and fall that will remind us of all the ways Halston actually deserves the tag of legend, from Jackie Kennedy’s pillbox hat to the slinky dresses to impress that were stalwarts of 70s and 80s nightclub style.

The twilight narrative also features in Celebration: Yves Saint Laurent. This film is based on 18 hours of footage from the master’s last collections, alternating between monochrome and black and white and revealing both the end of his working life and Pierre Bergé’s mythmaking.

There’s fiction too: the frocky horror that is In Fabric: ‘Suspiria crossed with an old Farmers catalogue’. There is always space for more frocky horror*, an occasional specialist subgenre in which clothes are not all they seem and the fashion mavens are creepy as (see also The Neon Demon). In Fabric’s red dress (of course) is bought for a special night out and turns out to be really special. “Mordantly funny and stylish”, is how the programme describes it, and it’s turning up in lots of must-see lists.

To wrap up this tranche of movies, almost literally, is Walking on Water, which looks at Christo’s most recent extravagant use of textile, a fabric walkway across and around an Italian lake. (The artist’s signature swathes were a big hit…) 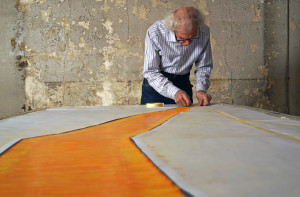 As well as the obvious dress/textile-themed films, there are also films that act as de facto frockumentaries, this year, Maria by Callas. Callas was not just one of the greatest of opera divas, she was also an icon of the height of mid 20th century glamour.

As ever, the links above are to the Auckland programme; the rest of the country will progressively find out which of these we get to see.

https://www.nziff.co.nz/2019/auckland/ will take you to all the other sites as well.

*If you enjoy frocky horror (I’ll stop now), you might also fancy looking out a few fashion gothic novels: first and foremost Lee Tulloch’s preposterous and preposterously underrated Wraith, which combines modelling, music and murder and actually pulls it off. Valerie Stivers’s Blood is the New Black and Tara Moss’s The Blood Countess run with a metaphor that can probably be guessed, but they’re slick fun.