Posted on December 7, 2014 by karinwarnaar

It’s all on in Australia this summer for fashion exhibitions: the hard call is which of the major cities to head to, with the eastern states vying for best fun indoors. 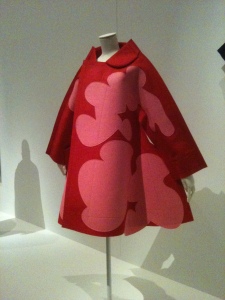 Brisbane’s had Future Beauty: 30 years of Japanese Fashion on at the Gallery of Modern Art since 1 November (finishes 15 February). But 30 years is nothing: the Queensland Museum has Undressed: 350 years of underwear in fashion, until 1 February. This V&A touring exhibition has just had a Bendigo run, and next heads to the Powerhouse in Sydney. And  why stop at two exhibitions when you can also have Costumes from the Golden Age of Hollywood at the Museum of Brisbane from November 22?

Sydney offers its three exhibitions under the single roof of the Powerhouse. The Strictly Ballroom exhibition (closing 15 February 2015) includes 40 original costumes (dribble). Next up, Recollect: Shoes (22 November 2014-April 2015) is also thinking big, with 700 pairs of shoes spanning five centuries. And alongside both of these, until mid September 2015, A fine possession: Jewellery and Identity.

Melbourne’s NGV has also come over very fashionable. The headline act is undoubtedly

The Fashion World of Jean Paul Gaultier: From the Sidewalk to the Catwalk,  17 Oct 2014 — 8 Feb 2015, comes to Melbourne from Montreal via London’s Barbican, where Doris de Pont reviewed it for the NZ Fashion Museum; it was also featured in September’s Australian Vogue. Also on at the NGV until 22 March 2015, Express Yourself: Romance Was Born for Kids provides interactive multimedia for stylish youngsters, while at the Ian Potter Centre: NGV at Federation Square, Mambo 30 years of shelf-indulgence looks at where art meets surfy style. 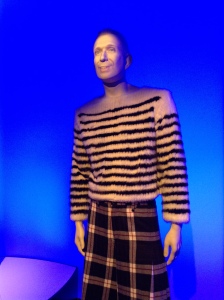 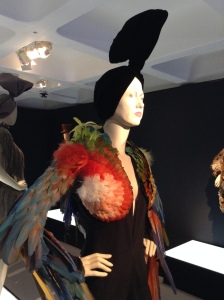 Arguably, this is all quite enough, but if there’s one thing about Australia, it’s that more is better. So there’s another one in Adelaide: Fashion Icons: Masterpieces from the Vollection of the Musée des Arts Décoratifs, Paris.

And in case this has left you feeling itchy-footed, don’t forget there are plenty of exhibitions at home this year as well – check out your local museums and galleries and those in the places you’re visiting. Happy holidays!

(Thanks to Doris de Pont for the images.)

One Response to Fashionable reasons to visit Australia this summer