Exhibition: Emma Kitts and the event of a thread

Join artist Emma Fitts and curator Melanie Oliver in conversation at the Dowse about textiles, feminist history and the exhibition From Pressure to Vibration—The Event of a Thread.

From Pressure to Vibration—The Event of a Thread will engage the history of textiles in Aotearoa New Zealand through artist Emma Fitts working in response to and alongside a selection of works from The Dowse Art Museum collection. 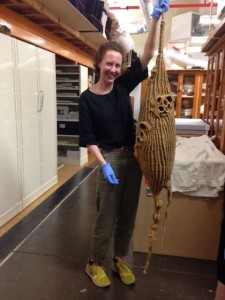 Emma Fitts with a work by Joan Calvert at The Dowse. Photo by Melanie Oliver.

Looking at the relationship of textiles to architecture, modernism, Māori weaving, garment making and the local textile industry, Fitts will draw out connections and the broader historical context for these collection works with a focus on the social dimension that is rarely captured in archives.

A rising interest in textiles internationally has brought fresh scholarship on fibre art and the Bauhaus Women Weavers, in particular weaver and writer Anni Albers, who was an important inspiration for weavers in New Zealand in the 1970s and 80s. Making textiles was a popular art form at this time, strongly related to the contemporary architecture, ceramics and education practices that flourished. After losing favour for a few decades, we are now seeing a resurgence of weaving within the arts due to its material tactility and the distinctive ability for textiles to tell stories. Fitts creates fabric works that are sculptural rather than weaving, but her work reflects on the figures, thoughts and feelings of various textile narratives and moments in time. 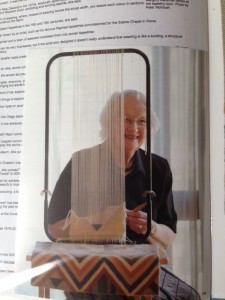