Posted on December 4, 2014 by karinwarnaar 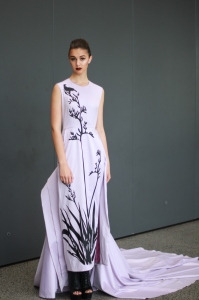 As a first time attendant to Cult Couture I had little idea of what to expect when I headed off to Mangere Arts Centre on Friday. I had not anticipated the fantastic vibrant designs, clever worked fibres and fantastically staged fashion awards show that I experienced.

A striking red runway and moody dry-ice-engulfed atmosphere set the scene for the show’s musical opener, Adeaze, warming the crowd up for the opening section ‘‘I’dentity’. Enter dance group Sau e siva,  with a high energy performance by six lads backed by a set of three Island drummers. What a way to kick off the show, these guys were great dancers with fantastic stage presence. The group – later joined by female dancers – performed throughout the show, keeping the attention levels high in the crowd in the fantastic way that the World of Wearable Arts show in Wellington also does.

The fashion/wearable art creations which started gracing the catwalk did not disappoint either, with the dramatic opening of a tapa cloth inspired evening gown which featured a striking fish tail created from what looked like hibiscus fibres. This was just a taster for the beautifully woven, knotted, printed and tasselled creations to come in this section. My favourite was the second prize winner Patupaiarehe by Maehe Ranginui and Nadia Tamihana: a sleek cocktail dress of what I think were lacquered feathers of black and navy, layered in flapper style to create an oil slick effect.

Section two ‘Recycled Revolution’ started off with a selection of creations from young designers, which showing off youthful re-imaginings of materials like tapa, flax and found materials. From Allpress coffee bags, through denim, hessian, toilet rolls and Nespresso coffee caps (which had been beautifully layered onto a dress like feather tassels) to the milk bottle, the materials used were  broad. Many were transformed into surprisingly wearable and stylish looking dresses; however the stand-out was section winner Magnetica by Christopher Davis. The silhouette had batwing arms of dyed bird net which were strung with layers of milk bottle ‘feathers’, the mesh was draped over the head creating a veil effect which was quite dramatic.

‘Flight of Fantasy’ was the section celebrating the magical, surreal and bizarre, where the designers could let their imaginations run wild. This section was opened by the musical talent of Sorceress Soundsystem, a duo who performed beautifully haunting pieces twice during the show. The winner of this section was Circus Freaks by Kimberly McManus; her creation was an impressively collared dress evoking the oversized styling of international designers Viktor & Rolf.

‘Urbanesia’ followed this, a section which invited entries to evoke the ‘city dwelling Pasifikan.’ The designs toned down, became more wearable and focused in on subtle detailing and quality tailoring. Both first and second places were creations that stood out for this attention to detail. The winner was a well-constructed navy jumpsuit called Harem by Kimberley Kindelan. Second place went to Chelsea Murry’s Division of the Plain, a well thought out mini collection of three monochrome checked outfits – accessorised with matching oversized clutches. The other outfit of note was the one of the few menswear ensembles, a brightly geometric printed jacket with matching trouser.

The fifth and final section of the show was ‘Formally Yours’, with it came the glamour of the evening. The section winner was a standout; unsurprisingly, it was also the premiere award winner of the night. Bay of Plenty designer Trish Strongman created My Kuia’s Garden, a well-structured lilac gown. The clever design of this dress included a stunning silhouette print of harakeke, thigh slit with matching cropped trousers underneath and a striking layered train.

As the night rounded up and all the awards were given, the celebratory mood of fashion, art and Pacifica fantasy peaked and the finale wrapped up with the tunes of Adeaze again. I was only disappointed that I could not attend the following night when one of the awards judges Lindah Lepou was to be presenting ‘AITU,’ an industry-led multi-media experience of Pacific couture, art and performance. 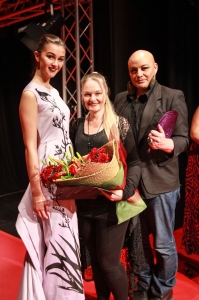