At the movies: festival season 2018

The NZ International Film Festival started releasing the 2018 programme this month, leading with Pietra Brettkelly’s Yellow is Forbidden. While NZ screening dates are yet to be confirmed,  Brettkelly’s documentary on Chinese designer Guo Pei has landed with a splash on the northern hemisphere festival circuit, and the trailer and advance press suggest it will live up to the anticipation. But still, with the NZIFF still a couple of months away, there’s plenty of screen style to build up to throughout the winter film season. 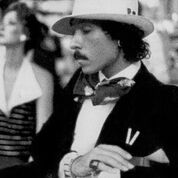 First up is this suave gentleman, Antonio Lopez, who features in Antonio Lopez 1970: Sex, Fashion and Disco (2017, 95 minutes), at the 2018 Resene Architecture & Design Film Festival, which kicks off in May in Auckland. Puerto Rican by birth, raised in New York, Lopez became the “dominant fashion illustrator of the 1960s and 1970s”, hung around with Bill Cunningham and Karl Lagerfeld and the great muses of the age – Grace Jones, Jessica Lange, Jerry Hall.

The RADFF runs from early May in Auckland until July in Christchurch, and the Lopez doco will screen in Auckland, Wellington, Dunedin and Christchurch so check your local showings and the overall programme here on their website.

Another famous New York fashion identity, the inimitable Andre Leon Talley, is the subject of The Gospel According to André in the Documentary Edge festival in Auckland and Wellington during May.

For those in parts of the country that gets these later, there is a general release coming up at the Rialto of the Blahnik biopic, Manolo – The Boy Who Made Shoes For Lizards.

Manolo – The Boy Who Made Shoes For Lizards

Other designer documentaries to look out for include Westwood: Punk, Icon, Activist and McQueen. There’s also another feature on the late photographer, Bill Cunningham, The Times of Bill. No word yet about whether these will be in the festival, but here’s hoping; otherwise they will be able to be tracked down online. (Another new English release looks promising: A Modernist tells the story of influential London menswear retailer John Simons and his effect on post-war youth culture.)

Fashion is also central to several of this year’s big feature films this year. The Phantom Thread, of course, was set in the fashion world. The Met ball is also integral to the plot of the upcoming Ocean’s 8. And then there are blockbusters that are simply feasts for frockies: think how much Black Panther‘s  style was analysed, while later in the year, Crazy Rich Asians will take us back to the world of Chinese couture customers.