Posted on October 1, 2019 by karinwarnaar 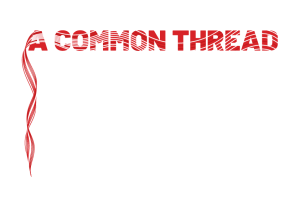 Some people don’t see the point of sitting around talking about dress and textiles for a week, but those that do turn up for the annual CTANZ symposium. This year’s, A Common Thread, was held at Nelson’s Suter Gallery the last weekend of September and they were fabulous hosts, with a fabulous programme.

The symposium’s keynote speaker, activist Yasmeen Maria Jones-Chollet, explained the Enslaved by Demand protests she’s staged for the past two years to draw attention to the human and environmental costs of the clothing industry, mass-producing bags and earrings in sweat shop conditions. It was the first of many presentations that addressed issues of justice, current and historical, and a full-throttle start to a full day.

Over the next three days, we heard from producers, artists, curators and researchers about their work making cloth, stories of learning and technology, local national, and international history, the threads of communities. Recidivists caught up with each other’s latest projects; it was also a delight to welcome newcomers both as attendees and presenters and hope we’ve enticed them to join and return. Over 20 presentations, nearly 30 presenters, and moments that moved us to laughter and reflection. Thank you all for sharing your knowledge and experiences.

Between sessions, we had time to explore Nelson, and the Suter’s serendipitously fabric-related exhibitions, a dinner overlooking Nelson’s harbour, scenic bus routes to local textile attractions.

Profuse thanks to the Suter for their warmth and hospitality, and to the generous sponsors who indulged us with various treats. The most profuse thanks however to Paula Haines-Bellamy and the rest of the organising team: Andrea Barnard, Karen Richards, Pam Saunders, Jo Kinross and Moya Montgomery, for a job so well done.

The symposium also means an AGM, and this year saw the election of a new committee, which for the next term will be led by Stella Lange and Natalie Smith as co-presidents and based in Dunedin. Bronwyn Simes will be taking over as treasurer/membership secretary and Moira White as secretary. As immediate past president, Vicki Mossong remains on the committee, as do Jennifer Matheson and Jane Groufsky in Auckland, and Karin Warnaar in Dunedin.

We formally acknowledge the contribution over many years of Kim Smith, outgoing vice-president, treasurer and membership secretary, Angela Lassig, secretary and former president, and of course Vicki. The new committee will take over at the start of the CTANZ year on 1 January. The Auckland team will then turn their attention to organising the 2020 symposium, details of which will be announced shortly. We get to unpack (literally and figuratively) from the Nelson weekend first.

This entry was posted in Nelson, Official stuff, Symposium, Uncategorized and tagged A Common Thread, Symposium 2019. Bookmark the permalink.

One Response to A Common Thread, Nelson 2019